To kick off my new habit of having a loose theme to my blog each month, I thought I'd start with diving into the differences in some of the mythical sea folk.  And all of this is as much of a learning experience for me as well as whomever may be reading!  When I started this month's research I had no clue as to the difference between mermaids, selkies and sirens, and it turns out there are some reasons behind this, because the meanings behind the words have shifted over time!

So what is the difference between mermaids, selkies and sirens?

Our folklore history lesson begins with sirens. Originally they were described as half birdlike, in Homer’s Odyssey  and early greek art and greek mythology.  They were thought to have the head of a woman, bird feathers, and scaly feet.  The were also depicted playing harps or lyres as well as singing. Sirens were depicted as dangerous, and their song was thought to lure in nearby sailors causing them to wreck their ships on the rocky coast of their island.  The term “siren song” has come to make reference to something that is difficult to resist, but will surely result in something negative.

According to the greek myths, Sirens were companions of Persephone and were given wings to search for her when she was kidnapped by Hades.  They were cursed for allowing her abduction, and they were fated to live only until a human could pass by them without dying.  In the Odyssey, Odysseus had his crew plug their ears and tie him to the mast of his ship so he could hear the siren’s song but not be able to throw himself overboard.  In this case, a human succeeded in passing by the sirens without dying and so it is presumed that the sirens then plunged to their deaths in the seas and rocks surrounding their island.

Greeks described sirens as living in a “meadow starred with flowers”, and though they lured sailors they were not sea dwellers, though Roman writers thought them to be closer linked to the sea, as daughters of Phorcys.

As time evolved, they  came to be pictured as half fish like.  There is discrepancy as to when this shift happened exactly, possibly as early as the Hellenistic period, but definitely by medieval times in later Christian bestiaries (illustrated volumes depicting different animals) where they started being described as having fish tails.  It seems that this may be where people started to think of sirens and mermaids as similar creatures, though they did not start out as one and the same.   Even the French word for mermaid is sirène! 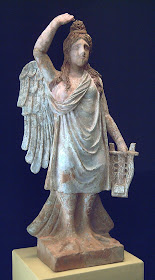 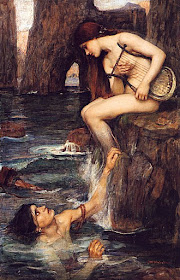 
A mermaid is a sea creature that is half girl half fish, usually with long flowing hair.  Sometimes they are associated with perilous things such as shipwrecks and storms, and they are often elusive and have some aspect of vanity associated with them (combing their hair or looking in a mirror, collecting hoards of human-made objects in their treasure caves).  Reports of mermaid sightings still continue today, though they are most likely manatee or other aquatic mammals in actuality.  Many cultures have some version of stories of a creature that is mermaid-like.

It is most likely that the idea of mermaids emerged from the idea of sirens from Greek mythology, and some of their attributes such as beautiful song and the luring of men to death by drowning became associated with mermaids.  Tales vary throughout history as to whether seeing a mermaid was a bad omen, or if they may in fact offer help or assistance or prosperity.

The idea of mermaids sometimes marrying humans has also prevailed through history, beginning in the 1500s, when it was thought that a water sprite could gain an eternal soul by marrying a human.  This idea influences later stories like Undine and The Little Mermaid. 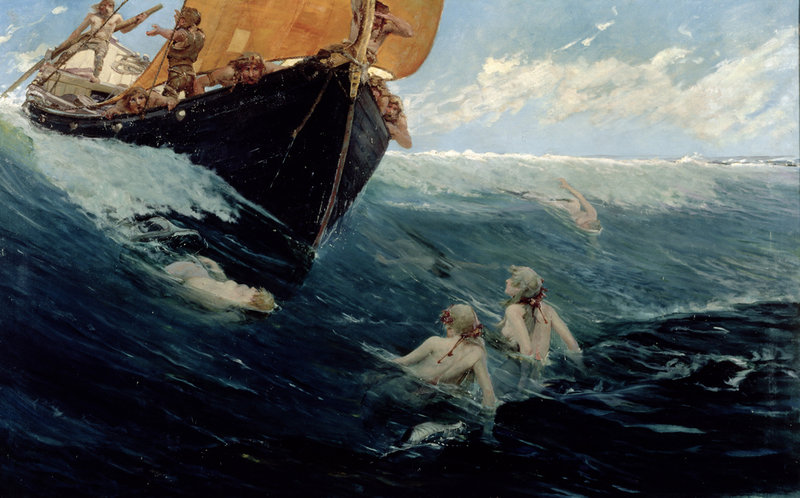 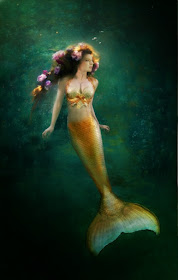 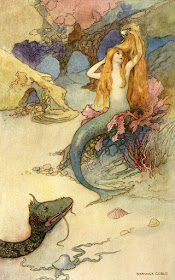 
The term “selkie” is specific to Scottish folklore, and means “seal folk”.    They are thought to be able to change between seal and human form by shedding their seal skin.  In the lore, selkies are often tricked into relationships with humans when someone steals their seal skin and hides it from them.  Sometimes these creatures are referred to as merfolk or mermaids, though it is thought to be an incorrect usage.  This is the only correlation between mermaids and selkies — the accidental overlap in terminology, and that they both may live in the sea and also be sighted on land.

In many of these tales, a seal woman may marry a human man that has stolen and hidden her seal skin, and upon finding it years later quickly return to the sea.  The skins are thought to be unique and irreplaceable, so until a selkie recovers their only skin, they are forced to stay on land, even if they may have families in the sea.  In many cases where the selkie is forced to marry a human man, they may end up having multiple children, and these offspring may take on seal like features such as webbed toes.

It is thought that these tales may have emerged to give answer to conditions such as webbed toes before modern medicine and science could provide them.  Additionally, the genetic skin disorder ichthyosis, which makes patches of skin appear scaly, may have been an impetus for these tales as well. 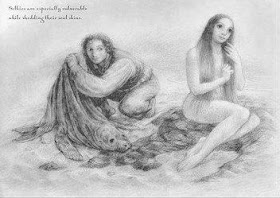 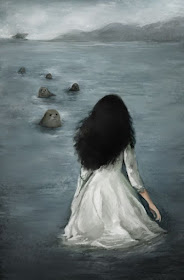 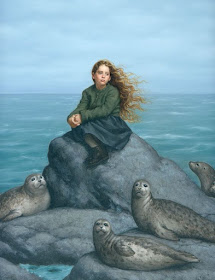 So there you have it.  Some of the key differences between these three fantastical creatures and their origins!  Hope you guys are finding this type of content interesting, and let me know if so!